Opening on 3rd June, the German Film Festival returns to Palace Cinemas’ to showcase the best in German-language cinema in 2021.

This year there are 30 films being presented at Palace Cinemas Raine Square, Luna Cinemas Leederville and Luna on SX Fremantle.

The festival lineup includes a selection of dramas, comedies, biopics and children’s movies; with a special screening of the 1981 film Lola.

Also included in this years lineup are 3 films presented by the Austrian Embassy; a behind the scenes documentary on the Vienna State Opera, a drama ‘Oscar & Lilli. Where no one knows us’  and an adventure movie ‘How I taught myself to be a child’.

The festival opens at Luna Leederville with an international premiere ‘Next Door’, a black comedy.  The opening night reception will include a glass of wine and German delicacies. Tickets to opening night are $38 for members and $42 for general admission.

We were invited along to Palace Cinemas, Raine Square for a showing of one of the featured films from the festival, ‘The Audition’. The film (shown in German and French with English subtitles) is a drama about a violin teacher, Anna who is trapped in the pursuit of success. Taking on a new student in whom she sees remarkable talent, Anna is driven by her perfectionism and her obsession with his progress, and this impacts on her relationships with her family at home. The film delves into the study of relationships and Anna’s inability to accept the people surrounding her for who they are.

Tickets: Available online: www.germanfilmfestival.com.au or at the box office 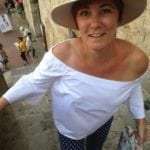