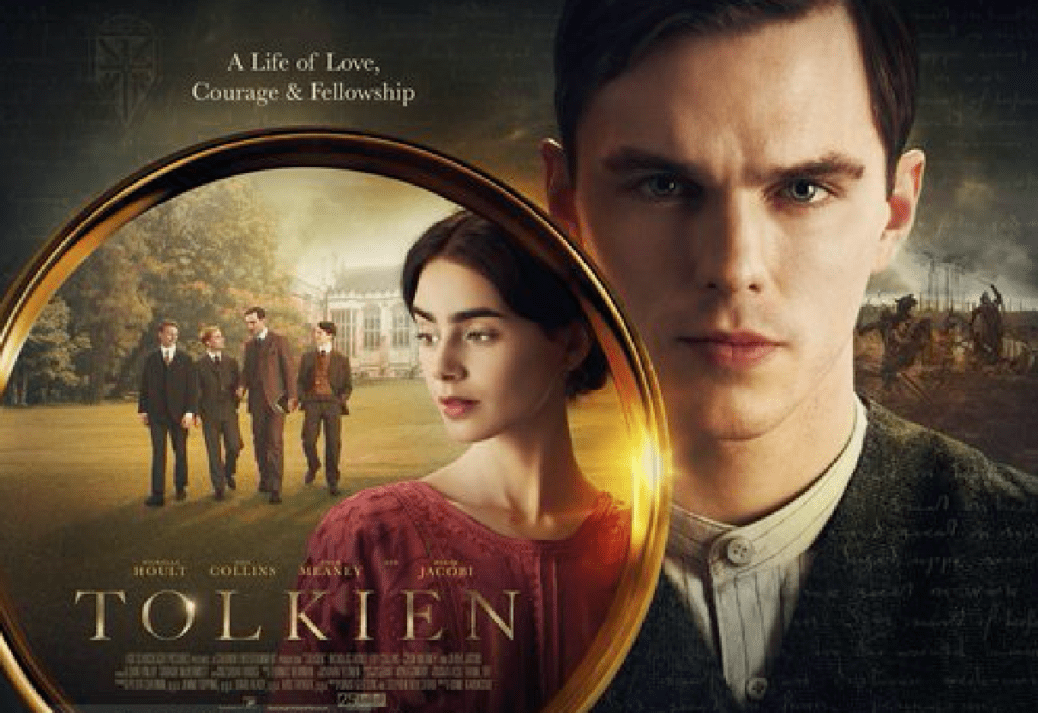 Based on the early life of the writer J.R.R.Tolkien, the movie ‘Tolkien’ looks into the events that shaped his life and from where the inspiration for his famous Hobbit series of books began.

As children the Tolkien brothers were raised by their widowed mother, who regaled them with wonderful tales of fairies, goblins and dragons, and taught them languages and arts, instilling in Ronald (as J.R.R.Tolkien was known) a lifelong love of language and etymology.

Orphaned at an early age, Ronald and his younger brother Hilary are sent to live in a boarding house by their guardian Father Francis ( Colm Meaney). Whilst living at the boarding house Ronald meets another boarder Edith ( Lily Collins), with whom he forms an attachment, that leads eventually to marriage in later life.

Although penniless the boys are intelligent and Tolkien ( Nicholas Hoult) is able to win a scholarship to Oxford, where he forms a lifelong friendship with three other students: Geoffrey Smith (Anthony Boyle), Christopher Wiseman (Tom Glynn-Carney) and Robert Gilsonite (Patrick Gibson). The four boys form a secret society called “the Tea Club and Barrovian Society” where they meet over tea to enjoy long philosophical discussions. The boys club becomes a lifelong ‘fellowship’.

The movie follows Tolkien’s life through university and his later deployment to the battlefields of Europe in the 1st World War, where he loses all but one of his friends; finally finding him reunited with his beloved Edith.

The film does a lot of flipping back and forth in time, as we are given insights into the inner workings of Tolkien’s mind, and may not appeal to everybody; I went along with a friend, and although we are both fans of both the books of J.R.R.Tolkien and the later Lord of the Rings films, I personally found this movie slow and laborious, whilst my friend thoroughly enjoyed it.